Not a productive week

I blame the heat. We have had a heat index of over 100 (between 105-115) all week. It doesn't even cool off at night. The kids haven't been sleeping in like they should and now it is Friday and I have managed to write about 1300 words all week. I am hoping to double that word count today, if the boy doesn't stop coming in and telling me what to do.

Sometimes life really does get in the way.
Posted by Jamie Eyberg at 7:54 AM 39 comments:

This post may start a half dozen times, I don't know for sure and I apologize in advance. 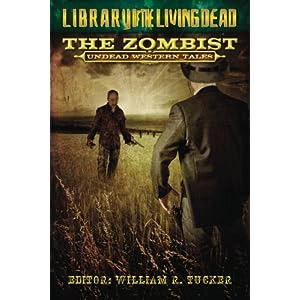 First off, in the shameless self promotion part of the blog, my story The Ghosts of Cheyenne Trail is featured in the Library of the Living Dead Anthology, The Zombist, Undead Western Tales. I have to say, and I am probably prejudiced, but I love this story. I was only introduced to what zombie fiction could be last year and I have tried to make the most of it without making it a cliche that almost all creature horror seems to have become. I believe it is also available on Kindle if you have one. Just look up Zombist.

In other news, my wife picked me up a copy of Cujo by Stephen King earlier this year. It is one of the few early King books that I hadn't already read. I am beginning to think there is a reason for this. It is not that it is a bad story, but the way he put it together is a far cry from what he has put out in the past. I don't know if he turned off his internal editor and decided to leave in a bunch of information that doesn't seem relevant to the story just so he could make pages and not have a novella or if he is going somewhere with all of this extra stuff, to put it lightly.  Maybe it is just me and I am being a little picky at the moment. I just got done reading Michael Crichton's last book (the one they found in his files after he died) Pirate Latitudes. It was not the polished storytelling that I was used to from Crichton. Again, it wasn't a bad book, but it wasn't quite done I felt. The paragraphs seemed choppy and the characters undeveloped. I have a feeling it was in his files for a reason and he died before his vision for the story completed itself. I have the same feeling for King's story. Something is off in it and I can't quite put my finger on it yet. I will know more when I finish.

Lastly, on the whole Leisure books ebook/POD thing. I know that bookmakers need to make themselves more profitable. The old paperback waste was just that, a waste. I can understand that they have to do something with unbought paperbacks and the way they do returns on them is to tear the front cover off and send that back to the publisher and destroy the remaining pages. It is horribly inefficient but more cost effective than actually returning the books. Something needed to be done with this. I would have been for marking the books down myself, but they didn't see it that way. I don't know what the answer is but I have a feeling the turbulent times in publishing are far from over.
Posted by Jamie Eyberg at 9:08 AM 18 comments:

I spent the weekend in the company of family, rodeo clowns and large animals that didn't want the riders on them in the least. It was a good time and of course that means that it was the annual rodeo trip for my family, much to the chagrin of my wife, who was not raised around the rodeo and only suffers through it because the kids like it. It is a lot like Star Wars and electronic stores for her. She does a good job at humoring me, bless her heart.

This also meant that I got absolutely no writing done and I am at a loss for words this morning. Maybe that second cup of coffee will infuse me with ideas. Have a great Monday.
Posted by Jamie Eyberg at 7:54 AM 15 comments:

So, I had my root canal yesterday. It wasn't bad at all. I had a good endontist do the work. I didn't feel a thing and during the procedure we had an interesting conversation going on. Full story and it has nothing to do with writing, I just wanted to share.

Each of the rooms had a little television hooked up to satellite. It was tuned into the today show, which is fine but the program was drawing to a close and I had no desire to watch whatever was after that (Regis and Kelley or The View, I don't know but I didn't want to watch it). They asked if I wanted to watch anything else. While the urge to watch cartoons was great I resisted and told them to switch to channel 269 (The History channel for those of you without Directv). there was a documentary on called Killing Pablo about the Colombian drug lord Pablo Escebar. It was interesting and kinda violent but what little I watched (Most of the time I had my eyes closed as two people worked with their hands in my mouth for 3 hours) it was pretty interesting.

Because it did take three hours and I missed out on the first hour of the documentary they started in on a second documentary. This one was also drug related but it was about the spiral of drugs in the United States from legal status to illegality. Again, it was fascinating. the surgeon had a good laugh about the marijuana stamp act of 1937, which simply states that you needed a stamp (tax) to have pot, but you needed the pot to obtain the stamp. Since you didn't have the stamp before you obtained the pot it was illegal and you were in violation of the law. A real catch 22. This got his assistant talking about the diapers that she is using on her son. They are made of hemp fiber which her mother was worried that because hemp is weed that the drug would leech into his system and he would be the happiest baby in the world. She said it took her quite a while to convince her mother that this was not the case and this is when the endontist said, "If that was the case Mark (her husband I am assuming) would be wearing them on his head."

I really don't know if that had a point at all. Have a great Wednesday. :)
Posted by Jamie Eyberg at 8:41 AM 32 comments:

Wow, I am really bad at this.

There is something about finishing a project that is taking me forever this year. I don't know what it is. I blame the hiccuping butterfly syndrome. I am flitting from one project to another with absolutely no rhyme or reason. Still, while I am not finishing anything I am getting words down and with every word down I feel just a little closer to the end on each one of them. Okay, not all of them. Some of them are going to go on forever I feel. ;)

Now if I can find another ten minutes to cough up another 200 words or so I will feel better today. Seriously. I have lost track of the number of words I have written today because I have wrangled a couple of hundred words in each of about 4  or 5 projects today (seriously, I can't even keep that part straight. I am a freakin' mess). I am going to blame my teeth because they are killing me and I can't have anything overly hot (goodbye coffee) or cold (sorry soda and tea) so my brain is shriveling under the lack of caffeine that I usually inundate it with.  Lucky for me I am having a root canal tomorrow. Yippee!

this is making no sense today, so I will talk to you in an caffeinated state later.
Posted by Jamie Eyberg at 2:08 PM 12 comments:

I like it when I look at words that I have given order to and realize that I wouldn't change a whole lot about them. I was looking at a story that I haven't looked at in six months (that is how long it has been with an editor) and realized that I really like them. I am changing a little here and there on it. Expanding my characters story, just a little, wondering where the road can lead him, but the bones of the story are still there.

I have been thinking of revisiting some of my longer pieces (And they shall have pages and we shall call them books) and seeing what I would change this time around. I have nothing to lose but time.

Just what I needed, more projects.
Posted by Jamie Eyberg at 10:26 AM 11 comments:

The wife and I took the family to an amusement park yesterday. It was a lot of fun and I think that my wife got it right when she said she hadn't had that much fun since she was little and got to experience much of the same rides the first time. It was a lot of fun, I will admit. There is something about being whipped around until you are dizzy that is satisfying and unnerving at the same time. Before I go any further, I am a roller coaster junkie. I love them, the faster the better. I am proud to say that my seven year old is one as well. She loved being plummeted toward the earth with several G's of force trying to force her from the seat only to be whipped skyward again at the last second, laughing the whole time.

It reminded me a little of writing. You never know where the action will take you and you hope that every failsafe works and you don't go crashing into the ground. At least my writing is like that, I don't know about you. All I know is that I enjoy the ride.

I would post a picture that the park took of my wife and daughter at the bottom of the first big drop, but they would both kill me, so next time you come over for a beer remind me and I will be happy to show you.
Posted by Jamie Eyberg at 9:13 AM 14 comments: